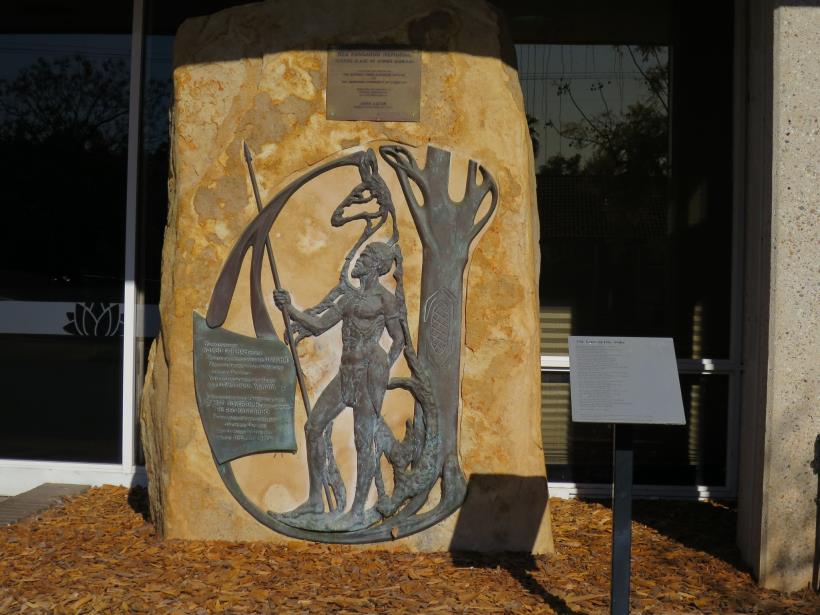 The 'Red Chief' Memorial is located in Abbott Street, near the front of the State Office Block. This Memorial is the first memorial to be erected in honour of an Aboriginal historical identity. Cumbo Gunnerah, or The Red Kangaroo, as he was called by his people, was a great warrior and revered leader of the Gunn-e-dar people of the Kamilaroi tribe. He was buried, in the late 1700's in a manner befitting an Aboriginal man of great importance - in a sitting position, backed by a tree carved with totemic designs in his honour. The story of his unsurpassed bravery, achievements and adventures were handed down from generation to generation and his place of rest treated with much respect. The remains were dug up by white settlers some two centuries later and sent to the Australian Museum, where they were kept for quite some time. They were eventually returned to the Red Chief Local Aboriginal Land Council in Gunnedah and he is now at rest within the Cumbo Gunn-e-rah Museum in the George Griffith Memorial Building in Gunnedah. Cumbo Gunnerah's story was heard by prolific author Ion Idriess who immortalised his story in the book titled 'The Red Chief'.