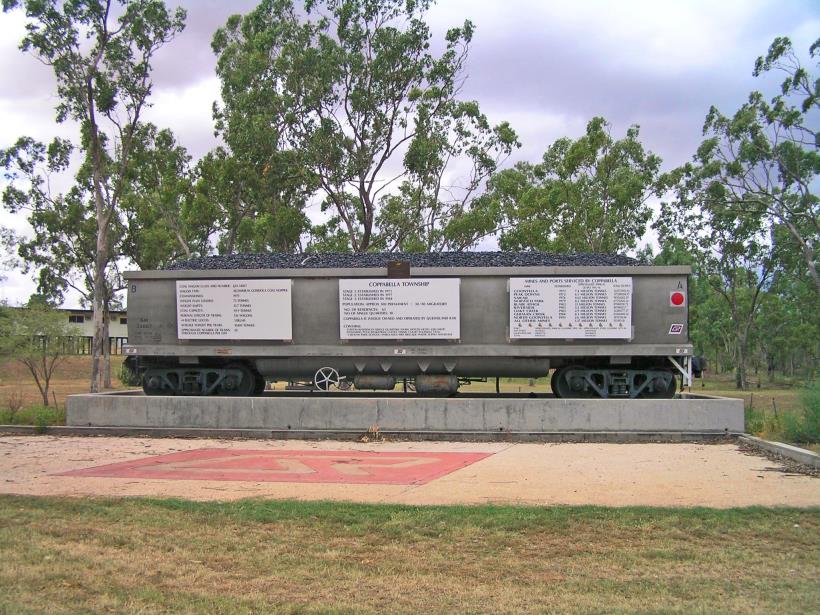 The town of Coppabella is a small community which lies approximately 159 kilometres south-west of Mackay. Recognised for its large mining monument at the entrance of the town, Coppabella was designed to service the junction of two railway lines, one from Goonyella Mine and the other from Saraji Mine. The railway line would then continue on to the sea at Hay Point, Sarina. The Goonyella to Hay Point line was opened on the 5 November 1971 and the Coppabella Railway Station was opened on the same day. The town is wholly owned and operated by Queensland Rail and contains: stations, residences, single-quarters, work depots, hotel, a shop, swimming pool, basketball court, tennis court, football oval, caravan park, school, ambulance, fire brigade and water supply! The town was established in three stages, with the first established in 1971, the second in 1977 and the third in 1984. The population stood at approximately 300 permanent residents and about 30 to 80 that were migratory in 1996 when the town celebrated its 25 year anniversary. Interestingly, the name Coppabella was given by Queensland Railways at the suggestion of the General Manager, Central Division. It is said to be an Aboriginal word meaning “crossing place”.